Andrew “Rocky” Raczkowski showed a photo he took of some graffiti on a wall in the Middle East where he served with the U.S. Army.

The blue words on wall mocked the U.S. anti-war movement and read, “I like peace. USA.” Raczkowski said the terrorists believe “the United States doesn’t have the stomach to fight the war.”

“If you take the handcuffs off the soldiers and let us fight, I think we could win it very quickly,” Raczkowski told a crowd of about 140 people in Pontiac on Saturday during a two-presentation on the war on terror. 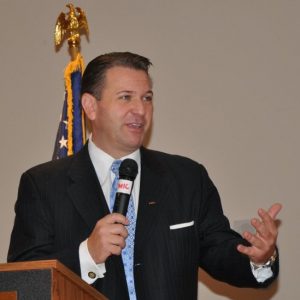 Raczkowski is running with fellow GOP candidate Paul Welday in the U.S. Representative 9th Congressional District to unseat Democrat Gary Peters. Raczkowski is a captain in the U.S. Army reserve and served throughout the Middle East in Operation Enduring Freedom – the name given to the wars in Iraq and Afghanistan.

Raczkowski said his comments were made as a private citizen and not in his capacity with the U.S. Army.

He said the approach has been “too politically correct.” He said a quick ending would mean many more civilian casualties.

“You don’t send them off to war and then make a political decision,” Raczkowski said.

After the meeting, Raczkowski said he didn’t like the approach of the war on terror by former President George Bush or President Barack Obama.

He criticized Obama for not making a decision on troop deployment to Afghanistan.

“As our men and women are dying, he is taking his time to determine a policy,” Raczkowski said.

He said Bush sent the troops over but then did little else.

The U.S. military is the premiere fighting force in the world, he said.

“No one can take on the U.S. military,” Raczkowski said. “We win every time.”

But the terrorists are now adapting to “low intensity conflict.” He said that’s when the terrrorists are “hiding behind women and children and taking pot shots at American soldiers.”

The U.S. immigration policy was putting this country at risk, Raczkowski said. He pointed to the news reports of Shirwa Ahmed, a Somalian refugee who came to the U.S. and become a naturalized citizen and was living in Minnesota.

According to the Washington Post, the FBI and CIA believe Ahmed blew himself up in Somalia on Oct. 29 in five simultaneous bombings attributed to al-Shabaab, a group linked to al-Qaeda.

After the meeting ended, Raczkowski said lax immigration around Mexico is also a problem as some terrorists are getting into the U.S. through the southern border.

“We are stupid,” Raczkowski told the crowd about this country’s approach to immigration. “We are too soft.”

The presentation shed light on many aspects of the war from recently declassified information.

• He showed video of an improvised explosive device – or roadside bomb – going off and lifting large mounds of pavement 15 feet into the air like a wave.

• He explained how Russia has been helping insurgents kill U.S. soldiers. Raczkowski told how the road side bombs have become more and more technologically advanced. When the U.S. learned terrorists were setting off IEDs off with cell phones, the U.S. started jamming cell phone frequencies. A U.S. Humvee accidentally knocked over a fruit stand that was wired. At first thought to be a bomb, the U.S. discovered that the cart was tracking what frequency the patrol was jamming so a different frequency could be used down the road on bombs. The fruit stand equipment was provided by the Russians, Raczkowski said. “We are fighting extremist Islamists … trained by some of the finest scientists the Russians have provided them.”

• He showed footage of a terrorist sniper shooting a U.S. soldier in the chest. After firing, the sniper can be heard repeating “Allah Akbar” over and over. But the U.S. soldier gets up, seemingly just stunned, and retreats behind cover. Raczkowski praised the equipment and technology being used. He said soldiers today have so much armor they are “walking around like a Robo Cop.”

• There was video of U.S. soldiers training the Afghan army. The U.S. trainer said if the Afghan soldiers were drug tested, they’d lose 80 percent of their army. Raczkowski said drug use is an accepted part of Islam in certain parts of Afghanistan. He said for four-hour periods of the day, “They are all stoned out of their minds.”

• There was video of drone bombings. It showed how a remote controlled drone captured enemy combatants on a road at night in Afghanistan. That drone gave the signal to soldiers back home at a Las Vegas base. Those U.S. soldiers were able to use joysticks and, with the images provided by the drone, wipe out the soldiers with surgical strikes.

Previous Post: From that Snickers at work, to water coolers to the late night at the bar, the tax man is knocking on the door
Next Post: Legislation wants arbitrators to consider whether cities can really afford to give raises approved in labor disputes